Our story starts in a dilapidated tenement building in New York in the 1870s.

A voluntary missionary visited a woman dying of tuberculosis and asked her if there was anything she could do for her. The woman replied: “My time is short. But I can only die a peaceful death if you save the little child next door.” At that, the missionary heard blows being struck and screams from a child in the home next door.

That girl was eight-year-old Mary Ellen. She had suffered terrible violence and abuse at the hands of her adoptive parents. The missionary tried to persuade the police and other authorities to do something to protect the girl. However, an absence of laws allowing intervention left the agencies powerless to help.

Animal of the human species

In desperation, the missionary turned to the New York Society for Prevention of Cruelty to Animals. Their officers went to Mary Ellen's house, removed her and successfully prosecuted the adoptive parents, citing cruelty to 'an animal of the human species'. Until Mary Ellen's case, the law treated children as their parents' property; in short, parents could do as they wished to their child.

As a result of Mary Ellen's case, the New York Society for the Prevention of Cruelty to Children was established in 1875. 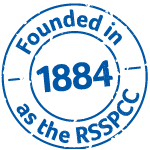 In 1921, the Scottish National Society received Royal Charter status and became the Royal Scottish Society for the Prevention of Cruelty to Children (RSSPCC). Initially set up to rescue children living rough and begging on the streets, the society became better known for investigating child abuse and neglect. In the past, the society's inspectors - often referred to as the 'cruelty men' - investigated cases of abuse and neglect reported by the general public. In 1968, new legislation gave responsibility for investigating child abuse to local authority social work departments. As a result, the role of the RSSPCC changed.

The charity subsequently changed its name to reflect its different role, adopting the title Children 1st in 1995. Since then, we have grown and developed the services we offer children and their families across Scotland.

Although much of our work is very different from those early years, we continue to rely on public support and always put children and their families at the heart of everything we do. The idea that "child protection is everybody’s responsibility" is central to our work and is as relevant today as it was all those years ago during Mary Ellen’s time.