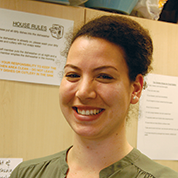 Connie is one of our support workers, based in Edinburgh. As well as helping families to have the confidence to prepare healthier, nutritious meals on a budget, she explains how cooking can help open up deeper conversations about where families need support.

I’m currently working with a young single mum with a 3-year-old daughter. She has a warm, loving relationship with her daughter and wants to do the best by her, so she asked for support to do some cooking at home that could be cheap and healthy, to increase her confidence and give her a wider range of healthy meals she can cook for her little girl.

If she did go shopping a lot got wasted because she didn’t know what to do with it. So she usually ended up feeding her daughter chicken nuggets, fish fingers, chips, frozen stuff – mainly because it’s cheap, but also because of her lack of confidence.

Often people think it will be more expensive to eat healthily, but I haven’t found that. The other barrier you find is that people don’t have the initial store cupboard staples that could be the basis of lots of nutritious meals.

We started with a simple, nourishing lentil soup recipe (which you can try below). After an initial outlay on stock cubes and lentils, she just needed to buy two carrots and an onion for about 32p! Because it made six portions, we talked about having some one day and the next and freezing the rest.

As well as the benefits for health, she was chuffed when she realised she was able to cook something from scratch.

Cooking is also great for opening up conversations. Because you’re not sitting face to face, but just working alongside each other and getting stuck in, it opens up other issues as you chat. It might be relationships with other family members, money worries or other things people are finding difficult.

I’m not naïve in thinking I’ll overhaul people’s lifestyles, but by supporting people with these healthy recipes then they’ll become part of the range of things they can feed their families – even if that’s a few times a week.

This is Connie’s recipe for a simple, low-cost lentil soup – nourishing for brain, body and food for the soul! 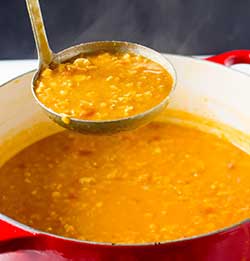 This soup is so simple and really cheap. These quantities give you four big bowls. You can chuck in any other bits you fancy, a few chopped potatoes will give you a thicker soup; two rashers of bacon chopped small work well also.

The ingredients for this soup (including bacon) come to around £5 but once you have the “cupboard stuff” you can make this soup for £1.30 (with bacon) or about 30p without. You can also make it vegetarian by using a veg stock cube instead.

Put all the ingredients into a large pan, bring to the boil and then turn down the heat and simmer for 45mins. You shouldn’t need any salt because of the stock cube but add a generous grinding of black pepper.