Thanks to funding generated by players of People’s Postcode Lottery distributed through Postcode Dream Trust, an exciting new partnership led by Children 1st is making it possible to develop Scotland’s first Barnahus, to protect, get justice for and support child victims and witnesses. 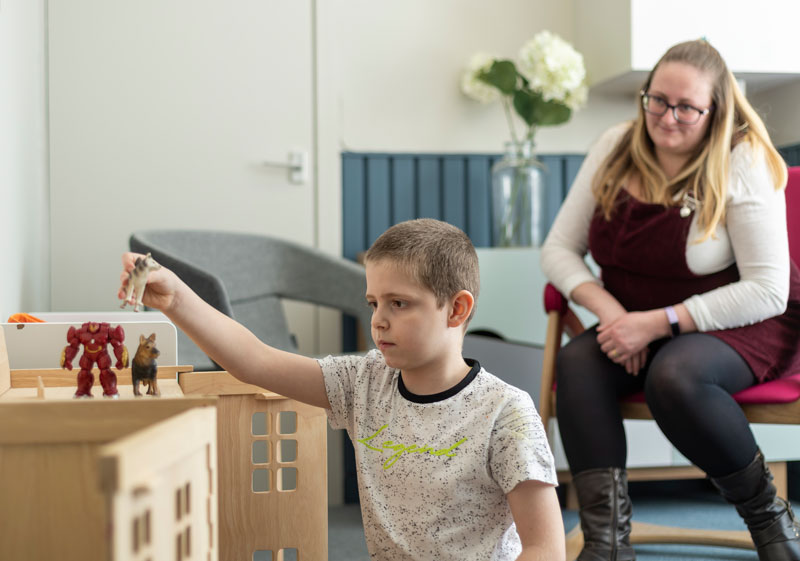 Project partners Children 1st, Victim Support Scotland, Children England and the University of Edinburgh have joined forces to create the UK’s first “Child’s House for Healing” a child-friendly, safe and welcoming place for children to go to, as an alternative to courts, social work offices and police stations.

The “House for Healing” is inspired by the internationally-renowned Barnahus model, first developed in Iceland. Designed to feel like a family home, the Child’s House will be a space where children can give evidence, receive medical care, take part in decisions about their protection and get support to recover from the trauma they have experienced.

By reducing the number of times a child needs to talk about what’s happened the Child’s House for Healing will ensure children get justice, reduce the trauma they experience and help them to recover more quickly.

Every year, 12,600 children in Scotland require special support to give evidence in court. It is hoped that House for Healing will become the catalyst for similar projects elsewhere in the UK so that more children are better supported when giving evidence and are able to recover from their experiences.

Mary Glasgow, Chief Executive of Children 1st, said: “We are delighted and incredibly excited to receive this funding from players of People’s Postcode Lottery, which will help end the nightmares of thousands of children who are victims of abuse and crime.
“Players have made our dream – to create Britain’s first Child’s House for Healing – come true. By creating and testing a new approach, the centre will transform our systems of justice, health, care and protection so that every child victim and witness is kept safe from further harm, gets justice and is supported to heal.

“We and our partners want to offer our heartfelt thanks to the players of People’s Postcode Lottery. With their help, we will offer children and their families the support they need to recover, repair and move on with their lives.”

See the moment when Mary Glasgow, Chief Executive Children 1st and Gary Kernahan, Director of Fundraising heard that Child's House for Healing had been awarded £1.5m by the People's Postcode Lottery Dream Trust

Laura Chow, Head of Charities at People’s Postcode Lottery, said: “I am proud that funding from players of People’s Postcode Lottery is being used to support children who are the victims of crime, creating a safe space for them at an incredibly difficult time. With this funding I hope that the children using this space are able to take the next positive steps in their lives.”

Kate Wallace, Chief Executive of Victim Support Scotland, said: “Many people would be shocked to see the heart-breaking harm that court processes and procedures can do to children who have already undergone terrible experiences. Sadly, in our work we see it every day. Our Dream Fund partnership brings together an incredible combination of experience, skills and networks and we are looking forward to working even more closely together to make the Child’s House for Healing real for children and their families.”

It is at times like now that we see the true value of organisations working together to support those who need it most, at their time of need ... I look forward to visiting the House for Healing and commend Children 1st for all their hard work and continued support of the work to achieve a child’s house model which will work for Scotland.

Humza Yousaf, Scottish Government, Cabinet Secretary for Justice said: “It is at times like now that we see the true value of organisations working together to support those who need it most, at their time of need. We continue to work hard to provide trauma informed support to children and young people who are the victims of serious and traumatic crime but there is always more which can be done.

“The Scottish Government supports the concept of a Barnahus for Scotland and is committed to bringing forward Scottish Barnahus Standards to support a trauma-informed, co-ordinated and effective response for child victims and witnesses of violence and abuse by placing the child or young person’s rights, wellbeing and best interests at the centre.

“I look forward to visiting the House for Healing and commend Children 1st for all their hard work and continued support of the work to achieve a child’s house model which will work for Scotland.”

£138 million was awarded to charities in 2019, thanks to funding raised by players of the lottery. In total, players have now raised more than £500 million for over 7,500 charities working in Britain and beyond. The winners of the Dream Fund receive their funding through Postcode Dream Trust - a grant giving trust, funded by players of People’s Postcode Lottery. There are two other winners of the 2020 Dream Fund who will be announced later this year.