Children 1st has been announced as the official charity partner of UEFA’s Women’s Under 19 Championships which are being held in Scotland this month.

As the charity partner for the tournament, Children 1st will benefit from a variety of opportunities which will raise awareness and vital funds for the charity to continue to offer support to children and families across Scotland. 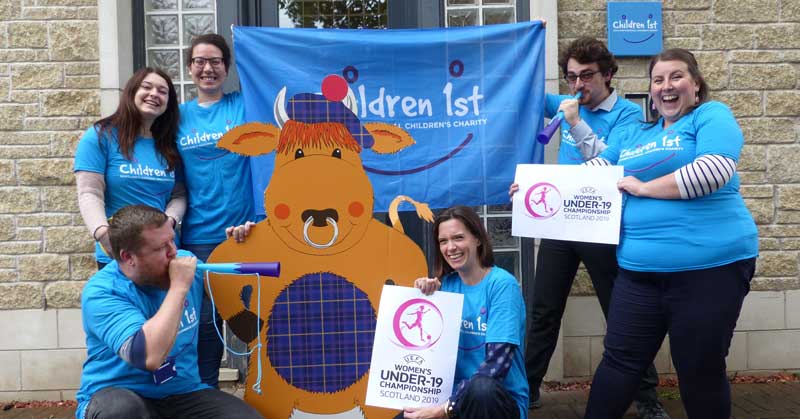 With Scotland qualifying as hosts, the team will face off against France, the Netherlands and Norway. Scotland will be on home soil in the championship finals in what will be the first UEFA finals tournament to be held in the country since 1970.

Linda Jardine, Director of Children and Family Services at Children 1st said: “This is a great time to be involved in women’s football, especially after the recent success of Scotland reaching the FIFA Women's World Cup.

"Children 1st is delighted to be the official charity partner for UEFA’s Women’s Under 19 Championships as it’s a fantastic opportunity to raise awareness of our work with children while also supporting Scotland’s future football heroes. All the teams taking part are sure to be a great inspiration for many children aspiring to be the next generation of sport stars.”

Pauline Hamill, Scotland Women’s Under-19s Head Coach said: "It is going to be a hugely valuable experience for the entire squad as we prepare to play in a European Championship on our home soil. The girls know that they are set to face the top players in Europe at Under-19s level, so it is imperative that they take as much from the tournament as possible as they look to develop as players.

"Following the interest in the Women’s World Cup in France we could not be hosting this competition at a better time, when the interest and passion for the women’s game is at an all-time high. The girls will inevitably have a sense of pride pulling on the jersey, but also knowing they are playing their part in inspiring children across the country to get involved in the game.

"Having Children 1st as the charity partner is a great fit. They aspire to put a smile on the faces of children who may not have a lot to smile about, and football is something that can bring joy to people of all ages around the world."

The tournament kicks-off on Tuesday 16 July, with matches taking place at St Mirren Park in Paisley, Glasgow’s Firhill Stadium, Forthbank Stadium in Stirling and Perth’s McDiarmid Park. All of Scotland’s game will be broadcast live on the BBC Sport website with the final being played at St Mirren Park on Sunday 28 July.