Dedicated football fan Cameron Martin, originally from Mid Calder, is coming all the way home from Sydney, Australia, to play at a charity football game at Hampden Park on Friday 14 June. 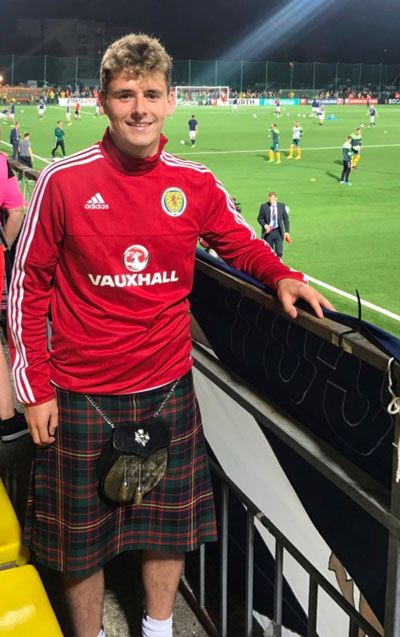 The 23 year old who has been playing football for as long as he can remember, will make an epic 10,000 mile journey from Sydney to Scotland to play in the Hampden Charity Challenge game on Friday 14 June.

Cameron will be one of 44 players, taking part in the game to raise funds in aid of the Scottish FA’s official charity Children 1st, and the Tartan Army Children’s Charity, charity partner of the Scotland Supporters Club.  Cameron and his fellow players will also receive expert coaching from Scotland coaching legends Craig Brown and Archie Knox.

Cameron, who has played for Mid Calder Colts, East Calder United AFC, Kirknewton AFC and North Perth United in Western Australia, said: “I was thinking about coming home at Christmas to visit my family and then I heard about the chance to play on the pitch at Hampden. This doesn’t come round often and not many people can say they have done it. Also being able to do something that involves helping children throughout Scotland is fantastic, Children 1st and the Tartan Army Children’s Charity do great work.”

“Naturally being left footed, I’m always kept on the left hand side of the pitch mostly at full back. Not quite Andy Robertson, but Steve Clarke knows where I am if needed."

Steve Clarke won’t have to look far for Cameron as his impressive journey home will see him arrive in Scotland just in time for the Scotland v Cyprus game on Saturday: "I’ll be there, following in my dad’s footsteps as part of the Tartan Army, there’s no support like it. My first trip was to Wembley was when we lost narrowly to England 3-2. However, Scotland taking the lead twice was an experience I’ll not forget. I have also travelled to Lithuania, Hungary, Slovenia, Ireland, Germany and soon on to Belgium.”

Ahead of the Hampden Charity Challenge on Friday 14 June, Cameron said: “I am looking forward to the whole experience of playing at Hampden, growing up and being in the stands it's something I’ve always wanted to do. Walking out the tunnel will be a great feeling but sticking one in the back of the net would be even better.”