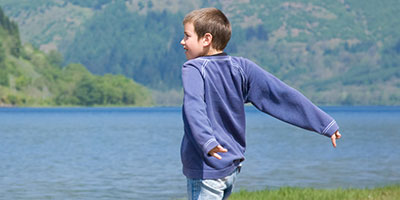 “We knew that if we ever got stuck, we’d go to Children 1st.”

While most children and their families come to Children 1st for support via health visitors, GPs or social workers, when Scott and his Mum needed help, they simply came to our front door. Ten years earlier, our family support worker Donna had supported Scott’s cousins through a difficult time in their lives. So when Scott was really struggling at school, they turned straight to Children 1st and to Donna.

Nine year old Scott told Donna how angry and upset he was getting at school. Things got so bad that he developed a nervous tic. Scott only had his Mum to talk to, but he often didn’t want to say anything in case it upset her. The requests to pick Scott up became so frequent that Scott’s Mum had been forced to stop working. There was no money coming in and she had no-one to share her worries with. The school wanted Scott to move somewhere else, but Scott and his Mum felt that would only make things worse.

Donna supported Scott and his Mum before, during and after conversations and meetings with the school and arranged a volunteer Children 1st befriender for Scott. Playing football, trampolining or going to soft play with his befriender helped Scott switch off from his worries, become calmer and get a good night’s sleep, so that he was in a better place to start the next school day. The befriender helped Scott’s Mum, providing a listening ear for her worries and giving her some time to herself. She also helped Scott’s older sister, who had stopped attending school, by setting up some work experience which helped secure her a place on a related course at college.

A year after Scott and his Mum knocked on Children 1st’s door, Scott is still at the same school. He feels less anxious, his tic has gone and his school work is improving. Scott’s Mum has time to study and her family’s experience with Children 1st has made her passionate about becoming a volunteer befriender herself.

She says: “Our befriender has been amazing, she could not have done more for our family and I thank her and Children 1st with all my heart.”

*To protect the confidentiality of the young person, identifying information has been changed.